Running is a primal instinct our species had from day one. From helping us escape from predators back then to involuntarily jump from one task to another in our present urban lifestyle, running continues to be a part of us in various manifestations. We run away from problems, we sprint towards success and we rush through our daily routine just to be done with it.


Thus, we are almost always “on the run” in our daily lives. No wonder, we love runners so much that there are multiple Olympic events for the same! Dialing it back a bit to the basic definition of running, this is the second movement we learn while growing up after walking. Our first games as kids involve some sort of running. Is this why we connect stronger to this activity when we grow up? Does the primal nature play a crucial role in building running communities?


In order to understand this, we spoke to Manoj Rane, an avid runner who began his journey in 2009 and has over four years of experience as a running coach, regarding the community aspect that brings this tribe together all over the world.


Manoj says over the past decade, people have started running and sprinting as it is one of the easiest ways to get fit and active. We are taking up this easy access form of exercise, which has led to the growth of communities.


Facebook, Instagram and other social platforms have established running groups where people can decide a date and time and go for a run in groups. People participating in these groups are gaining benefits of social interaction and stimulation in addition to the typical gains achieved from aerobic exercise.


Most of us think of gyms or parks when the words ‘fitness community’ comes to mind. Running has provided an alternative for those who do not want to spend too much on a gym membership or fitness equipment. Manoj says that people run for different reasons, some may prefer running alone as it provides a getaway from stress caused by work or other reasons, others look at it as a meditative experience.


Many avid runners have different goals, be it a medal from running a full marathon or just for the sake of participating with many others in their favourite sport. This has led to the rise of running communities locally and abroad.

In his experience of 4 years as a trainer, Manoj says that one of the best showcases of community formation and running in groups happens in marathons. Famous examples are the Mumbai marathon, the Kaveri Trail marathon of Karnataka, New Delhi half-marathon and the Pinkathon which takes place in 8 cities across the country. These events bring out the best in the running community, promoting healthy competition, awareness and a sense of belonging for many. Many celebrities have shown their love and support for running which has led to further participation.


These communities are no longer restricted to local and national events, instead, runners can now connect with their peers all over the world. This level of global recognition is usually associated with Olympic sports and fan favourite sports such as cricket or football.


However, unlike those sports, there is no age limit to run and there in itself, lies the charm. There is a certain level of fitness needed to play a game of football or tennis which could prove difficult for many. However, all running needs is the will to start and one is good to go. By transcending ages and even gender, running actually fosters the burning topic of equality like no other sport.


As we all know, it is easier to build communities in such a scenario and they tend to have strong foundations too. It is this rock-solid base coupled with all the health benefits which propel running to the top of the community-building mountain.


So, if you have never tried running, join a nearby community and see the effects for yourselves. Alternatively, if you are already a runner and a part of one such group, then you understand how this works. And remember, this phenomenon occurs because just like socializing, running is in our blood.

Title: How running is the fastest and surest way for building communities

SEO Title: Running - The best community builder there is

Meta description: We are no strangers as human beings when it comes to running. It is a primal instinct that we all have and is a part of many fitness routines. But how does it help build communities?

Price is over ... Seriously and stitches is tooo week .. never expected this type of quality at this price range.. 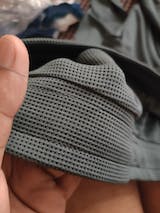 Material is good, shiny and comfortable too. Using it for yoga.

It is very good.